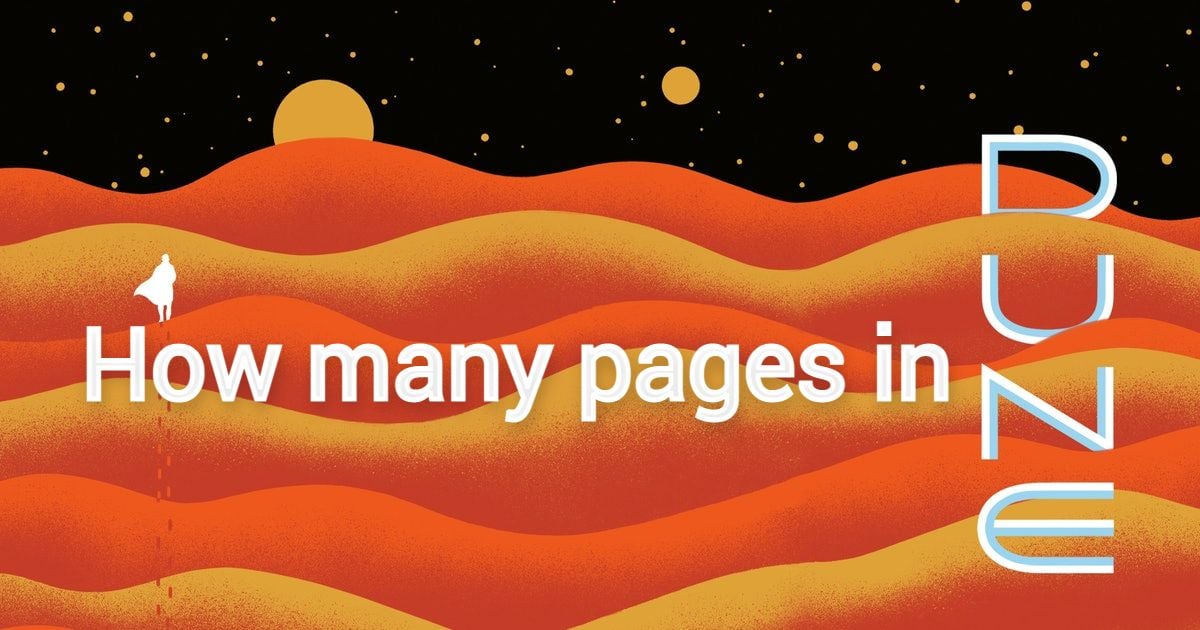 Dune is 412 pages long. You can only read one book and get the full story; the only book with an ending is Dune. In addition to multiple sequels written by his son and other authors, Frank Herbert also created a number of prequels.

The Dune sequels continue the story that was first established in that film, but there isn’t exactly a cliffhanger that calls for them.

Dune, an expansive work of science fiction by American author Frank Herbert, was first published in 1965 as two separate serials in Analog magazine. It won the first Nebula Award for Best Novel and split the 1966 Hugo Award for Best Novel with Roger Zelazny’s This Immortal. It contains the first installment of the Dune saga. In 2003, it was cited as the best-selling science fiction novel ever.

So, here’s a rundown of the Dune books I recommend reading in order. I initially urge you to read the first three novels of Frank Herbert’s original canon. Once you’ve read all of his original writing, you can read the sequels, most recently Legends of Dune and its follow-up.

If you want to start reading this series, all you have to do is click on the book’s cover; Amazon will then be the link that appears.

Summary of the Dune Book

Dune takes place in a far-off future galactic feudal system in which many noble houses control planetary fiefs. The protagonist of the book is young Paul Atreides, whose family assumes control of the planet Arrakis. Although the planet is a desolate, sparsely populated desert wasteland, it is the only location where melange, sometimes known as “spice,” a chemical that increases lifespan and sharpens the mind, is discovered.

Space navigation also requires melange, which can only provide the kind of multidimensional knowledge and awareness that is necessary. Because melange can only be produced on Arrakis, controlling the planet is both a desirable and dangerous task.

The plot explores the intricate relationships between politics, religion, environment, technology, and human emotion as the factions of the empire fight for control of Arrakis and its spice.

The five sequels to Dune that Herbert authored are Dune Messiah, Children of Dune, God Emperor of Dune, Heretics of Dune, and Chapterhouse: Dune. Following Herbert’s death in 1986, his son Brian Herbert and author Kevin J. Anderson continued the series in more than a dozen additional books that were released starting in 1999.

Novel to screen adaptations are infamously difficult and complex. In the 1970s, cult director Alejandro Jodorowsky attempted to turn the book into a motion picture. After three years of development, the project was shelved because of rising costs. The 1984 adaptation film directed by David Lynch garnered varying reviews from critics.

Denis Villeneuve’s second film adaptation, which won six Academy Awards, was released on October 21, 2021, to mostly positive reviews from critics. The first half of the original novel was mostly covered by Villeneuve’s film; development has already begun on the sequel, which will cover the rest of the plot and is scheduled for publication in 2023.

The series has served as the inspiration for a number of board games, role-playing games, and video games.

An introduction to the Dune books and films

The Dune novels are infamous for their complicated narratives, characters with strange names, and thought-provoking topics. So it seems sense that prior film adaptations have had difficulty. A intriguing documentary resulted from the failure of cult filmmaker Alejandro Jodorowsky’s 1984 film adaption, which was virtually unanimously panned. The SyFy Channel adaptation is good but way too long.

It is the year 10191. Arrakis’ fief lord is Duke Leto Atreides (Oscar Isaac), a member of the mighty House Atreides. This planet, which resembles the Sahara and has a sparse desert landscape that makes Tatooine look absolutely welcome, also happens to be the source of melange, a potent stimulant commonly known as “spice.”

It has come to be regarded as one of the most precious substances in the cosmos because it is a sacred psychedelic that even has the ability to extend life.

It’s not an easy task for the young Paul to assume the responsibility of succeeding his father. Paul experiences excruciating pain when the witch-like ‘Truthsayer’ Gaius Helen Mohiam (Charlotte Rampling, with her face hidden) orders him to put his hand into a plain-looking box. This is a coming-of-age tale that is being performed against the most unfriendly of backdrops, and he passes what will be the first of many tests.

Dune also combines the personal and political in a tale about devotion and treachery as House Atreides battles the schemes of the opposing House Harkonnen, which formerly oversaw the spice harvesting. As he plots the overthrow of Leto and his clan in a violent and deadly coup, Stellan Skarsgrd’s grotesque, slug-like Baron Vladimir Harkonnen makes for an excellent enemy, combining elements of Colonel Kurtz in Apocalypse Now with Jabba the Hutt.

Although the plot of Dune is fascinating, it’s the world-building that will blow your mind. Elite-level production design, costumes, and visual effects are all expertly crafted to bring Villeneuve’s gripping portrayal of Herbert to life. This science fiction is meant to be completely lost in, from the suits used to recycle the body’s moisture in the desert to the helicopters with rotor blades that flap like mosquito wings.

However, there is a wealth of information to investigate if you want to delve deeper into Herbert’s world. It’s important to remember that Herbert passed away after Chapterhouse: Dune, which had a shocking cliffhanger. Twenty years later, a sequel based on the author’s notes was written by Kevin J. Anderson and the author’s son, Brian Herbert. If you decide to do so, the reading order for the books is listed below. There is a lot of information to take in.

Tweets of the people who read the first Dune book:

Kaloethina said that they might need this in their adulthood.

Enna Lovecraft tweet about the first book and the 2nd one.

Bede said that “these shelves were organized by someone who doesnt read ” and it’s kinda true because who needs 4 covers of Dune when it is the same story.

Audiobooks are getting more and more popular. Many avid readers are trying to figure out whether it is better to read audiobooks or not. Today, I will answer the question, should I listen to audiobooks? Not only that, I will list quite a few reasons for my answer as well. Therefore, once you go through…

Running is considered to be one of the best cardio exercises. However, running often can become mundane and boring, and therefore many people tend to ask the question “should I listen to audiobooks when running”. My effort in this article is to find an answer to this question. I positively affirm that there are good reasons…

The Art of War is a wonderful book authored by Sun Tzu. He was a famous Chinese military general apart from being a successful military strategist. Though this book may be of greater interest to those who are from the army, even ordinary people may have reasons to find this book interesting. In short, should…

1 billion people never read books and no one can bother them for not reading books. You don’t have to be ignorant or illiterate to avoid reading books. Before humans invented pens and paper mills, they shared information and built their societies. After inventing paper, humans did not focus on writing books. Books are a…

Book reading is something that has been with human beings for many thousands of years. They are interesting, exciting and could help men & women of all ages and also children to get transported to a completely and totally different world. There are many other reasons as to why many people are attracted towards fantasy…