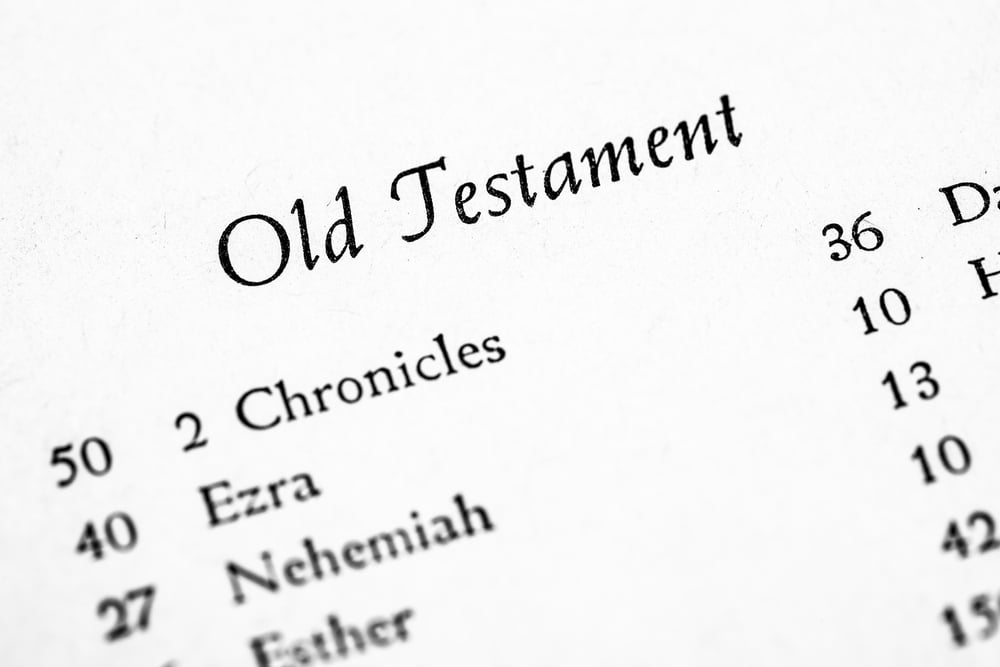 The Old Testament, which comprises 39 separate books, is the foundation of both the Christian and Jewish faiths and provides historical accounts of ancient Israel.

The foundational texts of the Jewish faith, or Judaism, were those found in the Old Testament. The Law, the Prophets, and the Writings were the three principal divisions of these texts. Although they were organized somewhat differently than how the Old Testament is now known, they nonetheless contain the same writings.

For instance, the books of Joshua and Judges, which are now more commonly referred to as historical literature, were once counted among the works of the Prophets. Once more, this merely affects how the books are grouped; it has no bearing on the books’ messages or authority.

The Hebrew scriptures were accepted as authoritative by Jews virtually as soon as they were composed. Think about the fact that Moses wrote the first five volumes, which are referred to as the Law. As soon as Moses wrote them down, this became the cornerstone of all Hebrew culture and life.

You’ll also see that Jesus and other New Testament authors made references to and even quoted from the Old Testament. This further established their reliability and legitimacy as the written word of God.

We’ll look at the books that make up the Old Testament while taking the structure of this first major section of the Bible into consideration.

A Brief of Canonization and Translation History

Let’s briefly discuss how the list of 39 books as we know it came to be as we get ready to examine the books of the Old Testament more closely. Some people wrongly think that the Tanakh, or Hebrew Bible, which is what Christians refer to as the Old Testament, is the same thing.

However, this is untrue. The division and classification of the books in the Hebrew Bible differs.

There was substantial discussion regarding which books should be included in the Old Testament. A book or text is said to be “canonized” when it is acknowledged as authoritative, which means that it is formally accepted as a part of the Bible. Christians today believe that the Bible is a closed canon, which means that it cannot be expanded to include later writings.

The Tradition Surrounding the Hebrew Scriptures

The lengthy Jewish tradition of canonization with regard to the Hebrew Bible served as a foundation for the choice of which works would be included in the Old Testament. The Hebrew Bible served as the inspiration for the development of the Christian Old Testament, while having a separate history and organization of its own. Nearly from their creation, Jewish scholars and communities have recognized the authority of the majority of these ancient books.

These important Jewish books were originally written in Hebrew and were translated into Greek by Jewish scholars in the second and third centuries BCE. This translation is known as the Septuagint.

All of the Tanakh’s books as well as a number of other later Jewish scriptures with important cultural content were all included in the Septuagint. Tobit, Judith, and Sirach are a few of the extra literature mentioned.

The Septuagint served as the primary source for the Old Testament during the early years of the Christian church. The foundational writings (those found in the Hebrew Bible) are acknowledged as canon by all significant Christian groups. Regarding the latter additional novels, there is less agreement, though (Judith, 1 & 2 Maccabees, etc.).

It is thought that the additional books were mostly composed during the intertestamental era, or the time between the events of the Old and New Testaments. Some books of the Tanakh also have new parts that seem to have been inserted later. For instance, both the books of Esther and Daniel feature new sections.

READ ALSO  7 Great Reasons to Read "The Art of War"

Many of these writings and additions are included in the Biblical canons of the Eastern Orthodox and Catholic churches. These works can provide insight into the life and times in which they were written, but they are not regarded as an authorized portion of Protestant Bibles since they are considered deuterocanonical books or Biblical Apocrypha in Protestant traditions.

The Bible’s Old Testament is divided into four main portions. The Pentateuch, the Historical Books, the Wisdom Books, and the Prophetic Books—divided into the Major and Minor Prophets—are known as these divisions. Each of these sections will be examined in further detail.

The first five books of the Bible—Genesis, Exodus, Leviticus, Numbers, and Deuteronomy—make up the Pentateuch, just like the Torah. These volumes recount the origins of the world and its history with a focus on the creation of the Israelite people.

The Law also refers to Deuteronomy, Numbers, and Leviticus. The Old Testament’s interpretation of the law outlines how God’s followers are expected to live. The Pentateuch depicts God’s plan for humanity and His unwavering faithfulness to His people through narrative recounts and formal standards for life.

The Historical Books make up the Old Testament’s next significant division. These volumes relate the history of the Israelites’ conquest of Canaan, the fall of the Kingdom of Israel and their captivity in Babylon, and their final return to Jerusalem.

Joshua, Judges, Ruth, 1 Samuel, 2 Samuel, 1 Kings, 2 Kings, 1 Chronicles, 2 Chronicles, Ezra, Nehemiah, and Esther are the books included in this part. This section explains how some writings are divided up into numerous books, which is why the Old Testament includes more books than the Hebrew Bible. For instance, Samuel is one book in the Tanakh but two books in the Old Testament.

The books of Job, Psalms, Proverbs, Ecclesiastes, and Song of Songs are collectively referred to as the Wisdom Books. These books are composed of moral proverbs, stories, and poetry. The main themes of the Wisdom Books are contemplations on worship, love, suffering, and life.

The Prophetic Books come last. A historical history and a call to action from the numerous prophets, or messengers, that God sent to the people make up the majority of each of the prophetic writings.

They not only record the happenings in ancient Israel, but they also explain how important these happenings would be in the future. The messages that God directed the prophets to deliver to the populace are recorded in the prophetic writings.

The Major and Minor prophets are the two main divisions of the Biblical prophets. The prophets’ classification as either “major” or “small” is not an indication of their significance or value. Instead, a group of shorter books together known as the Minor Prophets make up the so-called Major Prophets, which are the longer Prophetic volumes.

The Tanakh and the Old Testament are organized very differently in this area. The Twelve, a collection of the twelve minor prophets from the Hebrew scriptures, is one volume. Each prophet is given their own book in the Christian Bible.

The numerous Old Testament books show how steadfast God’s love is for His people. The Old Testament canon is meant to orient us to God and to inspire us to live righteously. It is made up of several works written by numerous human authors over a wide time period and in a variety of literary genres and styles.

The Old Testament prepares us for the Gospel by presenting us to a God who loves the world so much that He would send us His son, Jesus Christ. It does this through the laws, historical accounts, words of worship and wisdom, and prophetic calls.

Do you love to read books? Well, many people do and this can actually help you to pass time effectively. According to a study, about 53% of Americans love to read books and they do it regularly. It is quite hard to stay away from the book you are currently reading and loving it. Do…

I’m sure you all remember how fans gave in when they realized the Game of Thrones series is about to come to an end. Whether you liked the ending or not, there is always an inner feeling that makes you feel that each second spent watching it was worth it. Now the real question is…

Most avid readers like to finish one book in a week. However, after doing so, they directly search for the next book which they can read. If you, too, are an avid reader, you might be following the same practice. By the end of the year, you would likely have read over 40 books. Even…

Sapiens — A brief history of humankind is one of the most well-known books written about the evolution of Homo sapiens and how they emerged from an insignificant animal in Africa to the master of the entire planet. There is something very profound about the book that enticed many tech professionals like Mark Zuckerberg and…